750 people lived in Gorran Haven in the early 1900s mainly fishermen, farmers, boat builders and blacksmiths. There were 5 shops and several ale houses selling home brewed beer.  Traveling out of the community was a rare event even to Mevagissey. There was a carrier who took fish and other goods to markets and brought household goods back to the village. There was a wagonette service on some days provided by local farmers to go into St Austell for shopping etc. For the housewife a travelling haberdasher visited.

On the evening of 11th November 1908 a number of residents gathered in Mr Pills boatyard to consider the building of a reading room for the use of the villagers, 42 people turned up to the meeting. The decision was taken to go ahead with the plan and they all undertook to pay 2d a week towards likely upkeep of a building. The whole village was enthusiastic and within the month Mr Williams of Caerhayes had undertaken to finance the building on his land providing £3.00 per year rental was paid.  There were guarantors immediately forthcoming and plans were made to furnish the building by the village ladies. There were collections made and the ladies held sales of work to raise funds.  The reading room was opened a year later on the 3rd of November 1909.  The room was heated by coke fired tortoise stoves and the lighting was oil lamps. Life in the village improved. A library was started by Mrs Marjory Williams in 1918 with books to improve the mind and where there could also be found papers for the reading of news. Mrs Williams lived in Llamledra House for the duration of WW1. whilst her husband was in London on war duty.  This new room hosted village teas for village church festivals, gala day and the big carnival that the whole village took part in following the band around the village finishing at the hall for sandwiches and saffron buns. This building became known as The Institute like so many halls in Cornwall because it was classed as a place of learning. Whist drives , socials and dances were regularly held. There are in the old records reference to an air rifle shooting club. At that time there was also a nursing association formed to help with the war effort. Drama and literary societies were formed and regular plays were performed.

As the years progressed between the wars a Woman’s Institute was formed that continued into 2004.

In 1948 the committee purchased the reading room from the son of the original benefactor Mr Williams who very kindly fixed the price at the actual cost of erection of the building  £165-7 shillings and 6 pence.

Because of demand for space it was decided that a new building was needed.

On 11th August 1948 a decision was taken to to build a second hall.

Between 1948 and  building in 1950 there were many parish meetings and there were many suggested sites for the new hall. The favourite at that time was at the top of Bell Hill in the corner field of Bell Hill and Sheep Lane. This plan was abandoned because it would be difficult to widen SheepLane and the drainage of the area very complicated . The Rural District Council objected because it was agricultural land.  Mr and Mrs Wellington  generously donated land next to the reading room. Parking cars and general access was not considered a problem because there were very few cars and the hall would be mainly used by villagers who could easily walk. Mr Frank Lobb was engaged as the builder and villagers levelled the ground and fenced in the area. Mrs Wellington  was always ready and worked hard to make her original ideas successful. Mr and Mrs Brown kindly gave large amounts of money for the building, sadly Mrs Brown who had been in ill health died before the hall was completed. She is commemorated in the plaque on the side of the building dated 1950. The hall was built and dedicated to the memory of the men lost in the two world wars.  Mr Wellington performed the opening ceremony and Miss Scoble who was carnival queen that year presented Mr Wellington with a souvenir key of the new building. The roof of this new building was of cedar shingle. These very quickly deteriorated in the rain and salt sea air so concrete tiles replaced them. This however was not a good move because the weight of them made the north wall bow outwards, therefore buttresses were constructed to support it. Something permanent had to be done. Another roof covering had to be done in the early 1960s.  Before another new roof could be done the north wall had to be stabilised so a rather risky project was hatched to pull the wall back into the upright position. Chains we’re threaded through the windows and over the lintels across the room linking through the the windows on the other side, a turfer winch was used to tighten the chains gradually in the hope of realigning the wall. Suddenly there was a ” “clunk” and the gap at the base of the wall and floor closed and the wall was back into position. It was now safe to put on a new lighter roof.

In the 1960s the reading room became a snooker room one end with a division making a meeting room in the smaller end space. This later became the home of the village playgroup until it moved to the school grounds. The reading room gradually became a dumping ground for unused goods. The snooker club having moved.  1960s saw a big fire at school and the hall was used as replacement until school was rebuilt. The hall has for many years supported many weekly activities. Youth clubs, again drama club, dances and dance lessons. The summer flower show with big emphasis on vegetables, flowers, cooking in many forms cakes, jams etc. The hall only had a tiny kitchen so an enlarged one was built on in 2015.

2012 saw the refurbishment of the reading room. The snooker room was stripped out and new floor, walls and lowered insulated ceiling were installed making a good home for the newly formed snooker club. The south end room was also refurbished and set up as a community cafe run by a cooperative. All the works done with volunteer labour. With the help of grants the main hall has also been refurbished with insulation and redecorating and new modern heating. Disabled access was also installed. All this work completed by mid 2014.  The outside area has been developed and carpark made because of the national trust kind lease of land to us in 2016.

The low stone building to the south of The Institute, now the Memorial Hall is the Reading Room. As I said last month, Reading Rooms were very popular in the early 1900’s through to the 1930’s when radio, T.V. and W.W.II changed people’s interests and outlook.

Our village Reading Room was built in 1909 by the then Squire, a very generous man, Mr John Charles Williams of Caerhayes Castle for the ﬁshermen of Gorran Haven. He had already built the Quay (1886) and Pound and donated them for their use.

The building was in two sections divided by a folding partition. The portion at the entrance had a ‘bogey’ which provided heat and a 3/4 size billiard table.

In the other section was a small lending library and a daily  newspaper was provided. The bookshelves were protected by doors which were of wire netting in a frame. In one of the windows stood a telescope and in the other a model of the Mevagissey Lifeboat, the James Chisholm. In the 1930’s the library fell into disuse but the Reading Room remained popular for billiards and was used by retired men in the afternoons and the younger men in the evenings. It was well run, mainly self-regulating with men like Leslie Couch overseeing in his quiet way.

With the advent of W.W.II the young men departed, the retired men took over and enlisted the help of the village ladies. Throughout the war it was a centre for fund raising to help the war effort, recreation and entertainment.

By 1944 it was clear that the Reading room was inadequate both in size and facilities, so these good people planned for the future and a new hall. A new fund raising incentive was before them. However, there was concern about the title deeds for the old hall. Under the Chairmanship of Maurice Hurrell a committee met the owner, Mr Charles Williams, M.P. for Torquay and they arranged to buy from him the free-hold of the Reading Room, subject to all its conditions.

Interest in the Rooms waxed and waned but sprang to life after the disastrous ﬁre at the Gorran School took place in the 1960’s. Then the school was thankful to have its use together with the newly built Memorial Hall until Gorran Primary School was rebuilt as we know it today.

The Rooms use faltered again until it was decided to completely renovate them. This was done by much good will and voluntary labour. Then because of events Matthew Fox and Gorran Snooker Club transferred to Gorran Haven and re-opened in 2011. The other portion was formed into the Coastal Path Café by an enthusiastic group of local ladies. Now we have new life, new beginnings and onwards. Well worth all the effort, all the ups and downs and dedication by so many for over 100 years. 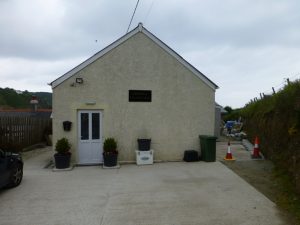